TESS partner, Charles Henderson presented early progress towards the development of the TESS ‘resilience tool’, at one of the prominent mountain research conferences, Mountains of our Future Earth (Perth, Scotland, 5-8th October 2015). Our tool is based on the concept of a resilience ‘compass’ developed by Wilding (2011), based on four dimensions i. Inclusive, creative culture ii. Healthy, engaged people iii. Localised economy iv. Cross community links. TESS has developed a set of indicators, which map onto the tool, giving a hybrid quantitative and self-assessment approach for CBI sustainability.

The presentation was given to about 40 delegates. Over 350 delegates from 30 countries attended the conference in total. A paper will be submitted for peer review for the Journal, Mountain Research and Development, in January 2016. 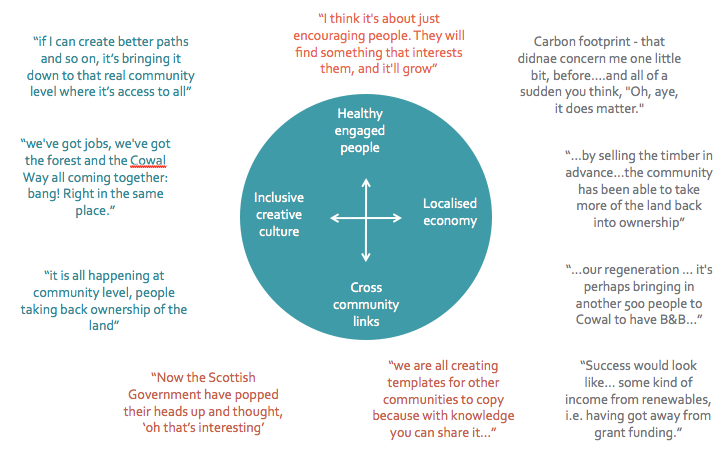 The compass concept was tested using two of the TESS CBIs (Community Based Initiatives), Colintraive and Glendaruel in Scotland, and the Eno Energy Co-operative in Finland. We concluded that the compass is a useful way to present these indicators in an appealing and useful form for CBIs. Already, the interviews held with the two CBIs give a rich source of quotes, which fit neatly against the compass points – see figure. Once quantitative information has undergone its Multi Criteria Analysis the tool will be developed yet further. We concluded from our assessment of these two CBIs that they share a few features in common, in particular: their openness to local membership; a professional management team united in their purpose and aim for community benefit; the use of forest outputs as central to achieving economic and ecological sustainability; and the importance of networking with external partners.

Worldwide, almost one in eight people live in a mountain area. Many of these are in remote and isolated communities, particularly vulnerable to changes in climate, and the risks that these bring such as agricultural losses and being cut off by extreme weather events. As a result, mountain communities often adopt an island mentality and aim for self-sufficiency and resilience. The concept of resilience is therefore of particular interest to mountain researchers.