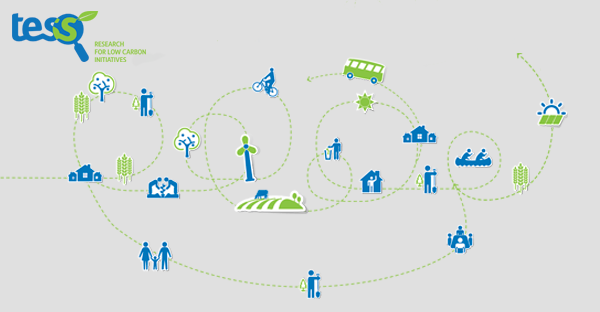 TESS project: summary of results and impact of research into community-led initiatives in Europe / December 2016

This is the last scheduled newsletter for the TESS research project. It gives a whistle-stop summary of TESS results and outputs, and considers the impact the research will have within the academic realm, community sphere and beyond. It also gives a flavour of what the project has meant to its researchers, and how it has influenced their future direction.

On behalf of all the TESS team, we’d like to thank the readers of this newsletter for their interest, and the communities and stakeholders who participated so willingly in the project, and wish them luck with their future endeavours.

CBIs are more common than we realise

CBIs engaged in sustainability activities are present in every sample region. They are found in both rural and urban areas, and across different political, social and geographical jurisdictions. We conclude that grassroots activities are likely to be widespread across Europe.

Great diversity is also a feature. This includes organisational structure, social and environmental aims, size, membership, access to resources, and relationship with public authorities. However, their form varies, according to the external conditions. Therefore it is very difficult to find causal explanations for their emergence, persistence and success.

Nearly three quarters of our case studies had pioneered a service, product or process which was new within the local context and which demonstrated community provision of improved-quality, accessible goods or services. In our sample, CBIs were most active in food and energy projects, and they share the common practices of others and also creatively re-invent and adapt these for their own purposes. Importance is paid to the creative process, rather than focusing on the final products alone.

And bucking the political status quo

In many cases, CBIs are reluctant to calculate the marketable contribution, or economic value, of their activities and prefer to use a non-market or share-based model of consumption. One-third of CBIs in our sample had started in the last five years, and almost two thirds are not involved in political action although they see their activities as political in nature. CBIs often feel sceptical about the capacity of top-down policies to spark a real transition to a sustainable society.

An estimate of avoided Greenhouse Gas (GHG) emissions was calculated, compared to a baseline scenario for each activity. This was related to an average person’s consumption behaviour in each country.

Initiatives engaged in the provision of sustainable electricity, heat, personal transport and vegetarian/vegan meals have the highest potential for climate change mitigation. For example, providing electricity from renewable energy sources can reduce the carbon footprint of the CBIs´ beneficiaries by a quarter. By supporting more sustainable means of personal transport (e.g. cycling) high reductions per beneficiary are also possible (around 11%). The consumption of vegan and vegetarian meals can reduce the GHG footprint of CBI participants by around 7%.

If 5% of European citizens engaged as beneficiaries of similar CBIs to the TESS sample, almost 85% of the EU-28 countries could meet the target of reducing GHG emissions by 20% by 2020 (considering the food/agriculture, waste, energy and transport domains). However, this impact could be offset by so-called “rebound effects”, as beneficiaries spend money saved on carbon emitting activities. On the other hand, some CBIs may multiply their GHG saving effects through awareness raising.

Some CBIs create new jobs either directly or indirectly, and sustain local economic revitalization and wealth retention. Many provide intangible benefits in the form of training, improved skills and human capital. Enhancing social capital was rated as a top priority by most TESS initiatives, the majority of whom develop or strengthen networks and partnerships via their members and beneficiaries. For example, those CBIs located in multicultural neighbourhoods, which are able to create new work placements for marginalized groups, have opportunities to enhance social justice. Yet the initiatives’ performance in reaching lower economic groups is limited. In the TESS sample, an average of 14% CBIs supported low-income beneficiaries, while conversely about two thirds of the initiatives supported a very high proportion (90%) of medium- to high-income beneficiaries.

The figure below presents the relative performance of different types of community-based initiatives. Impacts have been averaged across all CBIs assigned to one type and ranked from 1st (best performance, “MAX” – e.g. high carbon reductions or strong financial sustainability) to 7th (worst performance, “MIN”). 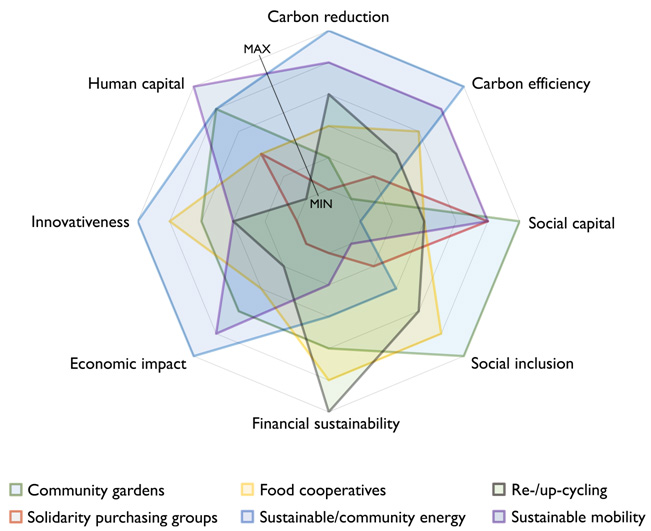 What drives the emergence and persistence of CBIs?

External factors favouring the emergence of a CBI include the presence of a socio-political vacuum to fill, or when existing institutions no longer suit the socio-environmental needs, desires and empowerment of the local community. Internal factors include a desire for changing the status quo coupled with strong leadership and participant values. The need for increased economic and socio-political self-sufficiency is often a building block too, along with a shared history of social organization and community mobilization. A similar set of factors influences CBI persistence.

About 63% of the surveyed CBIs have been replicated elsewhere, and 49% emerged using the blueprints of similar initiatives. However, growth of a CBI often implies structural and value changes, which may corrupt the CBIs’ original vision of sustainability and make critical voices leave.

How CBIs are resourced

CBIs use a variety of income generation approaches. Access to public funding is mostly difficult. In many cases financial sustainability relies on contributions from members, particularly volunteer labour, which equates to an average 16 hours per month per participant (this can be both a strength, as a cost saving measure, and a risk, when members suddenly drop out). Affordable space – for offices, for food growing or for energy generation – is crucial for many initiatives.

Very important also is the general policy environment in which they are established, such as transparency, low bureaucracy and coherence between political and institutional bodies, laws and regulations. In general, dialogue between CBIs and public agencies, is scarce. However, this varies greatly between regions: initiatives in Scotland, Germany and Finland tend to have much stronger links with public institutions than those in Spain and Italy.

What are the TESS project impacts?

One measure of the TESS impact is the level of external involvement and sharing of results with communities themselves. As well as the 63 case study CBIs with which we interacted deeply as we gathered information, undertook interviews and shared progress, our researchers also disseminated the TESS results to hundreds of CBIs through our www.sustainable-communities.eu website, workshops and the mid-term un-conference, and a booklet with portraits of community action across Europe.

Our legacy includes two self-assessment tools to support CBIs (accompanied by supportive materials in the form of information sheets and introductory videos):

These were further elaborated in a Transition Strategies Policy Report.

A series of three policy briefs were also produced with TESS’s sister projects, ARTS and PATHWAYS:

The findings of these policy papers have also been disseminated through an open day in Brussels and via publications and papers.

TESS through its researchers’ eyes

Over its three years, over 40 researchers from eight partners have contributed to TESS.

Rafaella Colletti of the Sapienza University of Rome believes the greatest project legacy is networking among project partners, academics and CBIs, adding: “These networks offered everybody the opportunity to learn from different experiences and perspectives”. For example, she had never before conducted research in Rome and is now planning future research activity based on city-based associations.

A collective response was given by Johanna Pihlajamaa, Outi Virkkula and Tanja Kähkönen of Oulu University of Applied Sciences in Finland. They all recognise the potential of CBIs to be important actors at local level for policy making and delivery, their social value and the CBIs need to “adapt to the existing conventions of the society” to survive. TESS also “highlighted our cultural differences, and provided yet another learning experience which benefits in various ways.”

TESS took Joshua Msika of Scotland’s James Hutton Institute (JHI) in a new direction from the start. He explains: “The job posting for a TESS research assistant was like it had been written for my CV, drawing on both my experience as coordinator of a transition initiative and my interdisciplinary research training. That changed my life in many ways, pulling me off my track towards becoming a sustainable smallholder and throwing me into the world of academia. The consequences of that change are still unfolding.” As a result of TESS, Joshua is now involved in research into government grant programme, the Climate Challenge Fund, the results of which will influence the trajectories of hundreds of communities across Scotland. Liz Dinnie of the JHI believed that TESS would have been even better with closer collaboration with a community-led network, and this participatory planning approach is being used for a new proposal.

Philip Revell of Climate Futures in Scotland reflected on “the crucial role of community-based initiatives in finding ways to navigate complex systems change as we move away from fossil fuel dependence. He also commented on the need to model research on the “open, participative, engagement processes that we need to develop in our communities.”

All the researchers were unanimous in believing the research widened their perspectives and enjoyed the collaboration with other researchers, and experiencing other European countries. Many also thought the project timeframe was too short!

TESS in a nutshell

Across Europe, grassroots community-led initiatives have emerged to deal with the big challenges of the early 21st century at a local level. TESS researched these community-based initiatives’ (CBIs) economic, social, political, technological and environmental impacts as well as their effect on greenhouse gas emissions. We also examined initiatives’ success and growth to determine how policy could encourage the further development of grassroots action across the EU.